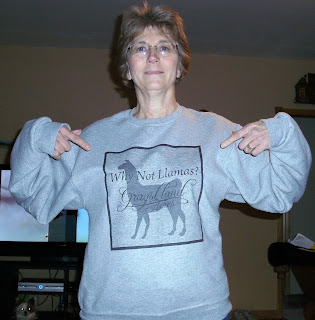 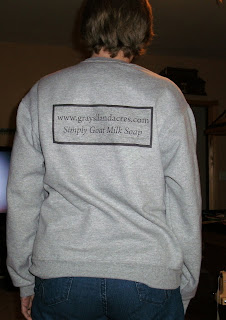 I am a walking billboard advertising GraysLland Acres. We had sweat shirts and tee shirts printed up and gave them to family for Christmas. Now we are advertising in of course Oklahoma, Texas, Florida, Utah and Colorado. When we get the question “Why llamas?” we simply answer “Why not llamas?”
It has been another quiet week at GraysLland Acres. I know I did not post anything last week, but I kept hoping Ebony would have her Cria (baby) and I could report on that. I guess she doesn’t realize how anxious I am for the new arrival. She just keeps getting bigger and bigger. Hopefully next post will be about a new llama.

I spoke at the Sertoma Club meeting this week and had a lot of really good questions and I was able to answer them all. I enjoy getting to talk to people about our llamas and goats and to be able to discuss some of the misconceptions that people have about them. Especially about the llamas and their spitting. I will admit I have been spat on, but it was because I was in the middle of two llamas either having a food fight or a disagreement about something. As I tell people when they visit our farm. “If a llama has their ears back and their head up, please don’t stand in front of them.” They will spit and if you are in the “line of fire” you will end up with llama spit on you.

I was also able to talk a little about the upcoming Mayes County Farmers Market (MCFM) that will start mid May and go through October. I’m not only looking forward to it so I can sell my goat milk soap, lotions, and my lip balm, but also so I can take advantage of all of the fresh produce that will be available there. This is something we have needed in Mayes County and I’m really grateful to the one who have organized it. We are still waiting to find out the location, but we will know that very soon and I will be passing that information on.
I took some llama beans (dropping) with me in a ziploc bag. Even though I told everyone they had little odor once they have been dried (which these had). I didn’t have very many take me up on the offer to open the bag and sniff. I am still working on the Llama Tea plant water. I think maybe the beans need to be dried a little more, because they are not as low odor as I would like to water my house plants with.
In April I will be speaking at the Rotary Club in Pryor and hopefully at the library, in the near future. I am thinking about trading in my car and getting a SUV so i can pull the trailer and be able to take a llama along so people can get up close to one.
We though we would have 8 goats having kids in March and April, but it looks like now we will only have 7. We are not sure what happened, or why, by our big black Nanny, Collinsville, lost her babies. She is fine, so it might work out that we will have fall babies, because Lucky is still in with the girls.
Big news! I order an electric milker and it will be here in a week or so. I decided if I was going to be milking more than 2 goats, I was going to need help. This should save time on the milking process and hopefully my soap house will be finished and I will be able to process the milk there and not have to carry it to the house. Since the soap house will have hot water, a refrigerator and deep freezer I will be set! 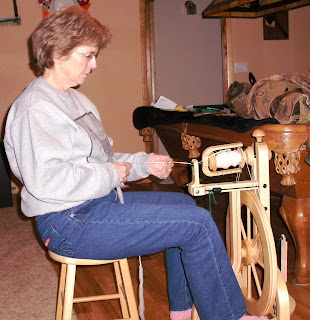 I am still working 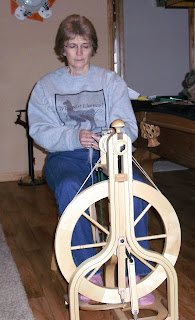 g on my rhythm with my spinning wheel. There are so many things you have to remember and do at the same time. You feet are peddling to keep the wheel going in one directions, because if it starts spinning in the other direction your yarn starts to unravel. You also have to hold the fiber with one hand while pulling with the other, then moving your hands back when it gets close to the spool. Someone told me there was a 16 hour learning curve, but I think my curve is going to be a little more than that. I am enjoying it and I think once I get the hang of it, it will be relaxing.
Until next week…
This entry was posted in Grays Lland Acres. Bookmark the permalink.