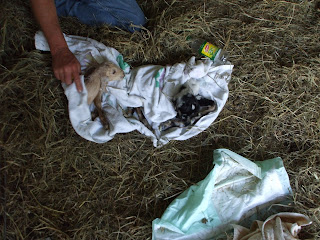 Meet Sugar and Beethoven! They were born April 22nd, to Echo and Lucky. Steve and I had been to Linda’s to feed the llamas that we have at her place. It was about 7when we got home and went out to feed and we saw the two babies laying in the hay. They were not moving and I thought they were both dead. When I got over to them I realized they were breathing, but were very weak.

I sent Steve to the house to get some old towels and we wrapped them in the towel and started rubbing them. The little girl, Sugar, came around fairly quick. She started bawling and trying to stand up. Beethoven, the little boy, just laid there and didn’t even try to lift up his head. 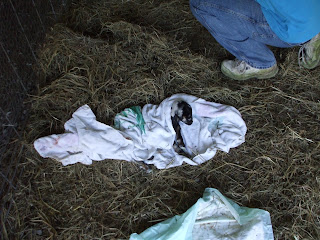 Echo is a first time Mother and acted like she didn’t even know what they were. I did stand Sugar up and got her to nurse just a little bit. Echo just tried to walk off.

I milked out about 1/2 cup of milk for her and put it in a bottle and got over half of it down Sugar and a couple of swallows down Beethoven.

We put up a heat light and put the kids under it. They were both still shivering, especially Beethoven. I knew it was going to be a long night because I needed to feed them every couple of hours since they were not eating much at a time. 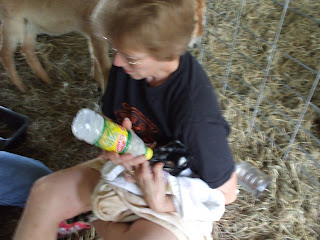 When I went out about 11 I decided this wasn’t going to work, with me trying to get back and forth to the barn, so I got a box, put some hay in the bottom of it and moved the babies into the bathroom for the night. I got up every couple of hours and feed them. Sugar was eating good and standing up. Beethoven would get a few swallows down and that was all. All I could do was get him to lift up his head, but it didn’t even try to stand.

Needless to say, I didn’t get much sleep that night. I slept on the couch and set the alarm for every two hours, but didn’t really need to because Sugar may be little, but she has a LOUD cry! She would let me know when she was hungry and I got Beethoven to eat a little bit each time I fed. 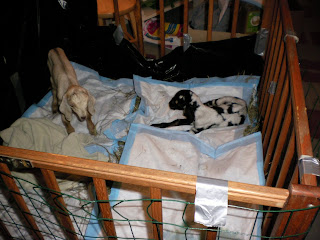 Friday morning and I went to my sisters and got a play pen from her, lined it in plastic, put some bed pads down, put hay on top of the pads, then put more bed pads on top of the hay. I moved the kids into the play pen and laid them on some towels. I put wire around the bottom so they wouldn’t get their heads caught and to keep Missy and Peaches from trying to get in with them. Even though Peaches is a poodle, she still tried to Mother them and would come get me if they cried and I didn’t get there fast enough for her. 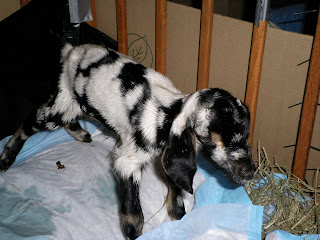 Beethoven was two days old when he decided it was time to stand up. He is a very active little boy now and they are both doing great.

Having house goats isn’t the ideal thing, so after I week I decided it was time to move them to the barn since I was only having to feed them every 6 – 8 hours and they were sleeping all night. I put a dog house in for them to get in and they both get in and snuggle in after I feed them. 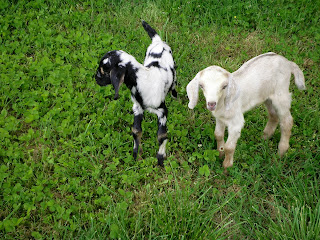 They were not real sure what to think of the grass. They had been in the play pen for a week and then in the barn. They sure had fun exploring when I did let them out. They tried to nibble on everything including the 4 wheeler and dirt. Just like a couple of “kids”!

They are growing fast and a lot of fun. We now have them in a pen outside. We covered the back part of it with a tarp over the top, back and part way up the sides to give them shade. I moved their dog house in it so they have a place to sleep. I also put a couple of feed containers that I turned upside down so they can get up on them and jump off. 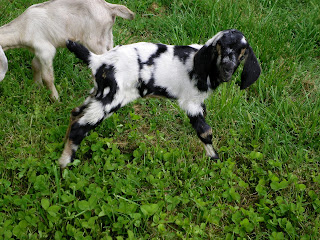 Steve and I just sat outside and watched them play last night and it was very entertaining.

Please feel free to come out and visit us. Just call first, to make sure we are home, but we usually are here. Can’t get too far away with nannies to milk and kids to feed.

I plan on making soap and cheese tomorrow and have fresh, raw, goat milk for sell by the quart, 1/2 gallon or gallon.