The following articles was in the Pryor Daily Times, Pryor, OK, Sunday March 28, 2010 in the Progress Edition…

Myra Grayson is back on the farm, but it’s a little different than the farm where she was raised.

Grayson and her husband Steve are the owners and operators of GrayLland Acres, using a play on the words with the double “L” in the farm name. The Graysons are raising llamas and Nubian goats.

After being raised in Mayes County, Grayson moved away and lived in a metropolitan area. A few years ago, she decided she wanted to get back on the farm after being a city girl for so many years.

Two years ago, she and her husband Steve started a llama farm at their home on North 438 Road, northeast of Pryor.

Grayson said llamas often get a bap rap. She has heard the question a number of times: “Why llamas?”

“I usually say, “Why not?” Grayson said.

She said people’s main reason for disliking llamas is “they spit at you.”

Llamas lay their ears back when they’re upset. They communicate by humming to each other. When they are protecting or when two males are fighting, they make a high-pitched whinny.

The Graysons had a new addition to their llama herd on Christmas Day. Christmas morning, Grayson and Steve walked out in the snow to check on their animals. Grayson went to the west llama pen and Steve went to the east pen.

Running across the pasture, she yelled at Steve, “We’ve got a baby!”

Having been raised on a farm, Grayson learned the signs when animals were close to dropping their young. However, she said you can’t tell when llamas are gong to give birth. The gestation period for a llama is 51 weeks. The females llamas usually gives birth be3tween 10 a.m. and 3 p.m.

This baby llama, or cira, was born shortly after 10 a.m.

The Graysons named their new llama Kris Kingle. Grayson said Kirs is the first llama born on their farm.

Grayson said they bottle fed Kris for two days until the mother’s milk came down. By the third day, he was beginning to eat hay.

Kris weighted almost 20 pounds the day he was born. A week later, he weighted over 30 pounds. Grayson said grown llamas can weigh up to 1,000 pounds.

Grayson feeds her llamas daily, except in the summer when grass is plentiful.

Grayson said llamas can be kept in an enclosure with a single stand of wire. If they want out of a pen, they will jump it, Grayson said, so building a high fence is useless. 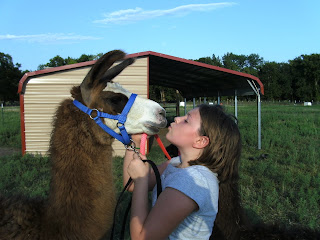 Tabi, granddaughter of Steve and Myra Grayson, gives Scout a kiss. Scout is the father of Kris and Myriah, the two baby llamas born on GraysLland Acres 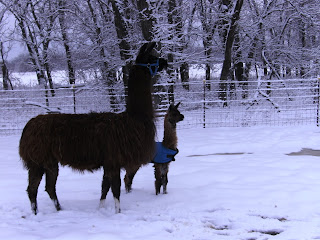 Kris Kringle was born December 25, 2009. They Graysons bought little Kris a cria coat, unknowingly selecting one to match his mother’s halter. Her name is Jolie.
Llama droppings, known as llama beans, are not a hot fertilizer, Grayson said. The manure has almost no smell, making it an ideal fertilizer for indoor plants. Soaking a cup of llama beans in water will create 10 gallons of fertilized water for house plants.
Llamas primarily eat grass. Their hooves are soft-padded, so they do not damage any terrain. Grayson said her cats and dogs get along with her llamas, but only because they were properly introduced.
Llamas do find in the cold, Grayson said, but they don’t like the heat. On summer days they like to lie in water to cool off. Llamas cool from their feet and bellies. Grayson keeps a mister in the shed to help the llamas stay cool in the summer.
Llamas have two coats – the under coat and the outer coat. Grayson said she shears her llamas once a year, and it takes about a year for them to grow their coat back. Her electric clippers were ruined int he spring flood in May 2009, so she used scissors to hand trim the llamas.
After cutting the llama hair, which is called fiber, Grayson washes it in a mesh laundry bag to get it ready for use. She said it takes four times of soaking to get all the dirt out of the fiber.
After washing, the next step is to comb the fiber, which is called carding. Grayson uses hand carders now but plans to buy an electric carder. Combing the fiber prepares it for the spinning process. 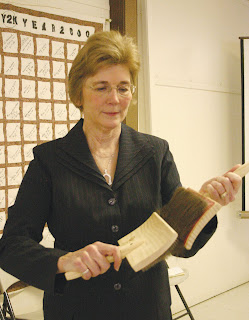 Grayson demonstrating hand carding, the process of combing the llama fiber to prepare it for spinning to make yarn
Grayson bought a spinning wheel and has been learning to spin the fiber. She plans to make llama yarn and use it for hats, scarves and sweaters.
“I’m trying to get back to the basics”, Grayson said.
Her goat is to keep natural colors, so she keeps different colored llamas on her farm.
In addition to the llamas, the Graysons also raise Nubian milk goats.
There are eight female Nubians at GraysLland Acres. Grayson said one nanny babysits the herd of kids for one day.
Grayson called Nubians the Jerseys of milk goats. She said Nubians are one of the few goats that produce cream with their milk.
Grayson milks her goats once a day. She said the nannies do not let down all their milk during milking; they save some for their babies. Grayson plans to invest in a electric milker in order to have time to milk all the nannies.
Grayson makes soap out of her goat milk, which is naturally moisturizing. She and Steve are in
the process of bulding a soap houses.
Grayson said she will be making goat cheese this summer, which she plans to sell out of her home along with raw goat milk.
She is working with Mayes County Farmers Market, which opens in may. Grayson will sell Soaps, lotions and llama beans at the market. 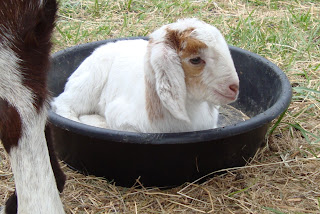 Little Girl, is a young Nubian, one of the nine goats at GraysLland Acres 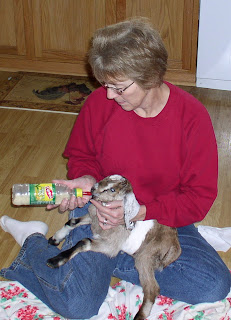 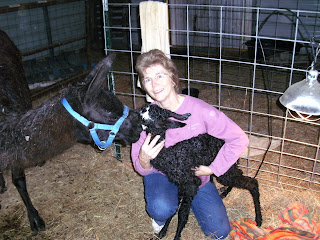 Myriah is the latest addition to the llamas herd. Ebony gave birth to Myriah the morning of March 9. Myra Grayson is holding Myriah right after she was born. Myriah weighed 23 pounds.
Note from Myra: Most of the information is accurate. I already have the electric milking machine, so as soon as the goats decide to give birth, I’ll be able to try it out a couple of weeks later. I’m ready, but they still don’t seem to be. Hopefully my next post will be of little goats!
This entry was posted in Featured, Grays Lland Acres. Bookmark the permalink.