I want to give you a little more information about our goats and the Nubian goat breed in particular. Nubian goats are often referred to as the “Jersey” of the dairy goat breed because they produce such a creamy milk with a high butterfat and protein content. This milk is ideal for creating cheese, yogurt, ice cream, soap and even butter. This is the reason I decided on the Nubian breed when we decided to get dairy goats. Just a FYI, we will have goat milk soap for sale on the website in a few weeks, so watch for that!

As we have learned from having Nubians, they are very vocal, especially during breeding season and at weating time. They talk to me when I head out the back door and get very vocal if I don’t come over to feed them first. It is a lot of fun just to watch and listen to them.

Thanks to their Middle Eastern, African and Indiana roots, the breed tolerates hot weather well, as long as they have plenty of fresh water. We found out they do not like it when Duke, our Great Pyrenees, decided to cool off in their water trough. I had to get him his own swimming pool so he would stay out of the goats water. Nubian’s also tolerate cold weather, but of course we have houses they can get in out of the elements. We were lucky to get some calf houses from a neighbor who had sold his dairy herd. They are the perfect size for a family of goats. I only wish I had gotten more of the houses. In the winter you do have to watch their long ears, because they can be prone to frostbite if they hand into the water trough.

Nubian’s usually have a long productive life and are said to be quite prolific. We had a nanny that had triplets last spring, but one did not make it. I feel like that was mainly due to the fact she decided to give birth in the middle of a cold, wet night. That was the only kid we lost last spring, even though the vet told me one of my little boys “probably wouldn’t make it”. I guess he didn’t expect me to spend the night out in the barn with him so I could feed him every 15 minutes. I’m happy to say he is now a very healthy billy, which is surprising because of the fact he did not stand up, on his own, until he was 2 days old. 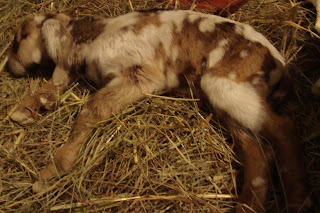 Our granddaughter, Tabi, had proven to us that Nubian’s are smart and easy to train. She had been able to teach all the kids to lead, within a short period of time. 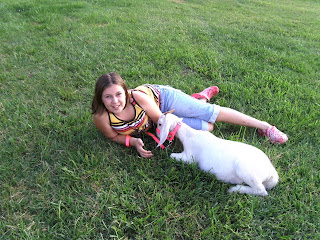 We do not dehorn or disbud our goats and I know there are two sides to this argument. We have found that their horns make good “handles” and have not had a problem with them hurting us, or each other with them. The problem with letting them keep their horns is the fact they do get them caught in the fence. I think we have the problem solved for the future, but it was a busy summer, keeping the kids out of the fences.

The best story is when Barb decided the grass was greener in the llama pen. She got her head stuck and was very vocal about the fact. I guess her momma got tired of listening to her and left her, but Jackpot, our gelded llama went over and put his head next to her and started humming. When I got out there, he went back to grazing, but I soon realized I was going to have to cut the fence to get her out. As soon as I headed to the shop, Jackpot went right over and put his head next to her and hummed and she got real quiet. I had never seen anything like that. I knew the llamas were curious about the kids, but had never seen them interact like that before.

Have you ever seen a goat in a bra? Well now you have. We got Collinsville a couple of years ago and the people we got her from had used her to raise a calf and he about ruined her udder with his head butting and pulling. When she had her twins, Jack & Jill, it soon became apparent that the kids were having problems nursing because she was “so low to the ground”. My sister and I decided that maybe we could put a bra on her to “hold her up”. Well what sounded like a good idea didn’t work very well, because it cut off the milk supply, so for the first week I would go out 3 -4 times a day and “hold her up” so her kids could nurse. They finally figured out they could lay down and get plenty to eat. Collinsville might not be the best looking goat, but she is sure a good milk produced. 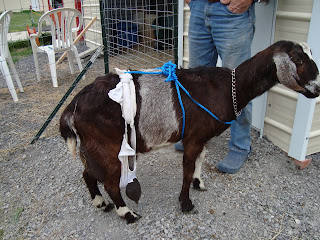 If you have any questions about our farm, goats, or llamas, please ask. I’m not an expert, but have learned a lot and love to share what knowledge I have.