Update of activities at Grayslland

I was reminded that it is time to update the blog. I’m going to try really hard to update it every week or so to let you know what is going on at Grayslland Acres. 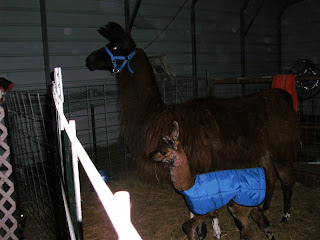 Of course you all know about Kris. He could not have picked a colder time to be born A couple of days it stayed in the teens, so I left him and his mama llama, Jolee, in the barn day and night. I have a heat light in there and they seemed to get along just fine.

I got him a blue Cria coat and he really seems to like it. The orange sweat shirt just wasn’t doing the job. He kept getting his feet tangled up in it. I figured it would be better to get him something that was designed for a llama not a little person. 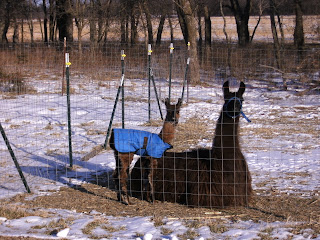 When I did get to let them out he sure had fun running and playing in the snow. He would jump up and kick his feet in the air, then run over to his mama llama. He even tried some of the hay, before getting tired and laying down on it. He is so much fun to watch. I wish I had had my camera with me when he got nose to nose with our cat Feisty. Reminded me of Thumper and Bambi. A Kodak moment, gone. Now I carry my camera with me when I go feed. 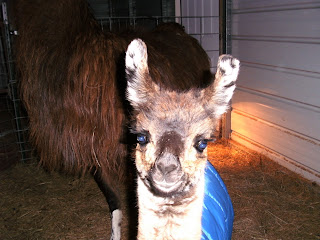 When Kris was born, on Christmas Day, he weighed about 20 pounds. Steve and I weighed him Saturday and he is already at 33 pounds. I am so thankful that his mama llama is able to feed him now and that I only had to do that for a day and a half. I have been giving him baby vitamins every morning and I think he really enjoys them. He tries to play hard to get, but really doesn’t try too hard to stay away from me.

I took his coat off of him today, since it got up in the 40’s but I think I will put it back on him this evening. I don’t want him to catch cold.

All of the animals have done well in the cold weather. Duke and Duchess thought it was too cold for the goats to be out a couple of morning and I enjoyed watching them try to keep them in the shed. The goats had other ideas and, one by one, they escaped to come over to the fence and talk to me until I fed them some hay. As I have mentioned before Nubian’s are very vocal goats.

We think our black llama Ebony will have her cria in late February. It is also a possibility that Duchess, our Great Pyrenees is expecting and she would also be due in February. Then in April, if all goes as planned, we will have baby goats and at least one more baby llama. Since we have 8 nanny goats, we could have a barn full of kids by the middle of May.

We do try to do things “by the book”, but the biggest problem with doing that is the animals don’t seem to be reading the same book we are, or if they are, they are on a different page.

The spinning wheel is great, I just haven’t had a lot of time to practice on it. It took me a while to get the tension set on it and I am doing pretty good with it now. I haven’t tried any llama fiber yet, I’m still using some sheep fiber that was given to me when I took the spinning class. I think I’m getting the hang of it and it is looking a little more like yarn now. You just have to remember to do so many things at the same time, it gets confusing. Your feet are peddling and one hand is holding while the other is pulling and you are trying to keep the wheel spinning in the right direction.

We are making progress on the soap making part of the business. We have a new building that will house all of the supplies and I’ll be able to get everything out of my kitchen. It has just been too cold to work on it. By summer we should have everything running smooth. If you are in the Pryor area I have taken some of my soap into Adair Street Market. I took a few bars of the Simply Goat Milk Soap and also the Oatmeal Facial Soap. I really do like the way my face feeling after using the oatmeal bar. Let me know what you think about it.