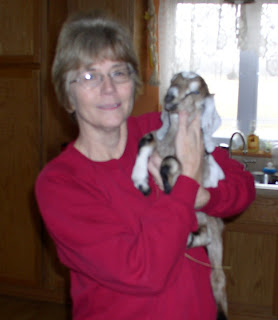 Here is a picture of me holding Val when we got him last year on Valentines day (hence the name Val). He was only about 12 hours old and of course we had to bottle feed him. It was cold out, so we kept him in the house for a couple of weeks. When he started getting out of the area I wanted him to stay in I moved him to the backyard. That worked really well for about 2 weeks. He had his goat (dog) house to sleep in and hay to munch on and of course I was still feeding him a bottle 3 or 4 times a day. The girls, Peaches the poodle and Missy, the Papillon, enjoyed going out and playing with him.

Like I said, this went on just fine until one day the girls were just having a fit barking. They normally don’t bark in the house because of the “no barking in the house” rule. I went to see what had them so upset and there was Val, in the hallway. I guess he had watched the dogs go in and out the doggie door enough, he decided to try it. We then sectioned off the yard where he could not get into the part where the doggie door was. He wasn’t too happy about it, but it worked.

Once we started having more kids (baby goats) we moved him out to the goat barn. I had another bottle baby, so it was easier to have them together. I have written about Lucky, the little goat who no one though would live. Val and Lucky became good buddies. 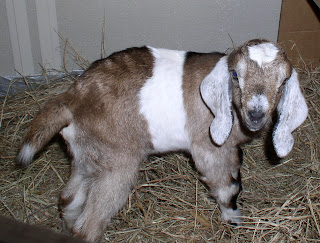 We used Val and Lucky this year as our bucks. They each had 4 nannies and we will know in April and May if they got their jobs done.

The reason I’m writing about Val, is that I noticed he was not acting right last Friday. He had diarrhea and when I got a closer look at him I noticed his gums and around his eyes were pale. That is a sign of worms. I have my goats on a schedule to worm them every 3 months. It hadn’t been quite 3 months but I knew it would not hurt to go ahead and worm him. I first gave him some peto–bismol and that took care of the diarrhea, I then wormed him.

On Monday morning he just didn’t seem to be getting any stronger so I called the vet and told them what I had given him and they said I had done the right thing Now we would just have to wait and see. Val was eating grain and hay, but still not getting his strength back. I went out 3 or 4 times a day and get him to stand up and eat. Some times he would stay up for a couple of hours and others only a few minutes.

When I went out Wednesday at about 7 I got him up and he was still standing 30 minutes later, so I felt good about that. I went back out about 11 to check on him and I could not get him to stand up at all. He was so weak and was wet from his own urine. I called the vet and they said I should bring him on over. I called my sister and she came in the pickup and I just held Val in my lap. He was so weak a couple of times on the way over I thought he had stopped breathing.

The vet took one look at him and told me that there really wasn’t much he could do. He said he could give him a Vitamin B shot and that might help for a little bit. He then told us that the worms in goats and sheep are building up an immunity to the worm medicines. Now they recommend that we not worm them unless their gums and around their eyes are pale. Then worm them. Something about the worm medicines killing off the “good” worms too. I guess we will try that and see what happens. I had him go ahead and get Val a Vitamin B shot, in hopes it would help him enough. He did stir around a little on the way home and when I put him in his pen he was holding his head up. I went out and checked on him a couple hours later and tried to get him to stand, but he would not even try. Steve checked on him when he got home from work and said that Val “talked” to him and laid his head on his knee.

This morning when I went out to check on him, he had died during the night. I know some of you reading this are probably thinking I’m nuts to be so sad over losing a goat, but they are more than animals, they are part of our farm and family.

I would like to hear from you if you have a solution to the worm problem. We lost another goat this summer to the same thing. It is ironic that the two goats we lost we purchased and they were both full blood Nubian’s. All of my others are crosses and seem to be very healthy. I’m wondering if it might not be a good idea to use a Boer Billy for next year. Do any of you “goat people” have any thoughts on this subject? If so I want to hear form you.

Sorry if this is a depressing topic for any of you, but that is life on the farm. We have to take the good days with the bad and thank the Lord that we have more good days.

We are getting sleet today and they are predicting snow for later tonight and tomorrow. I’ve gotten everyone fed and ready for whatever the weather does.

An update on Kris. He is doing great. He has really grown and loves to jump and run and just show off.