We woke up to over 8 inches of snow on the ground this Christmas morning. Steve and I decided to bundle up and check o 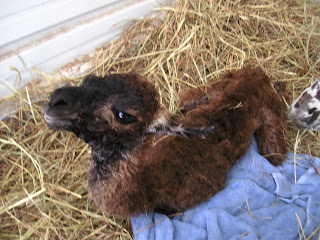 n the animals at about 9:30. The heaters had gone off in the water tanks, so we broke the ice from the ones in the goat pens then headed to the llama pens. Steve went to the east pen and I went to the west. We had just rearrange the llamas on Wednesday so everyone would have some shelter. As I got to the gate I saw what looked like a baby llama and sure enough that is what we had. Jolie had decided “why not have my baby on the coldest morning of the year!” The baby was not more than 15 minutes old. It was so cold, I had Steve go to the house and bring me some towels so I could get the little things dried off. 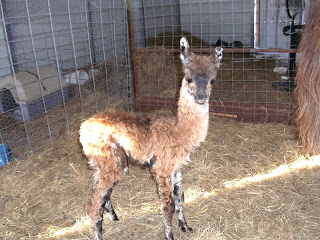 Since it was so cold in the shed and the other llamas were so curious about the new comer, we decided to move mama llama and baby to the goat barn, which thankfully had no goats in at the moment.
We got the baby warmed up and he (yes we have a boy) was trying to stand up. I might have rushed it a little, but it didn’t look like Jolie had much milk so I decided to feed him some goat colostrum I had frozen. He really seemed to enjoy it. I think she will be able to take care of him now. I just didn’t want him to get too weak, especially with it being so cold.
We have named him Kris Kringle, since he was born on Christmas. Right now he is all legs! I know I’m not suppose to handle him much, but that is hard because he is so cute and cuddly!
We talked to our mentors Roger and Penny and they told us we were doing things right. They suggested giving him an enema, and yes we did just that and everything seems to “come out” okay. I can add that to my resume. 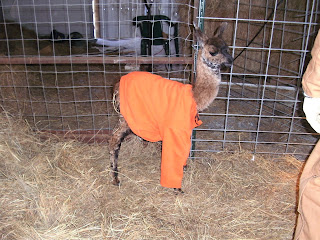 They also said that we needed to feed him every 2 hours until his mama llama comes into her milk. Thank goodness I froze goat colostrum last spring. Kris seems to like it and has eaten two bottles.

The other thing they suggested was putting a sweater or sweat shirt on him to keep him warm. Of course the ONLY shirt I could find was an orange Oklahoma State shirt.When Steve saw my choice he said “If OSU can at least keep him warm, go for it”. So I did and I think Orange is his color. Steve said being Christmas OU red would have been more appropriate, but he didn’t want me to use his NEW sweat shirt so Tabi lost hers. (It was too small for her anyway and Linda just gave it to her to get a rise out of Steve.) Sorry Tabi but I knew you would have let Kris have it if you had been here. 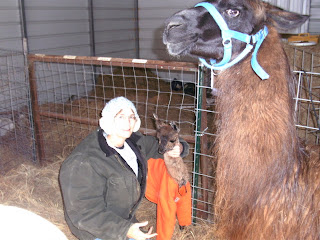 Steve and I have a difference of opinion on this photo. I think Jolie likes her boy in orange and of course Steve thinks just the opposite. Well, after looking closer at the pictures, she is unhappy about something, but I still don’t think it is the shirt!
I will keep you posted, with photos as Kris grows. He is the first llama to be born on our farm!
Merry Christmas to all!
This entry was posted in Grays Lland Acres. Bookmark the permalink.